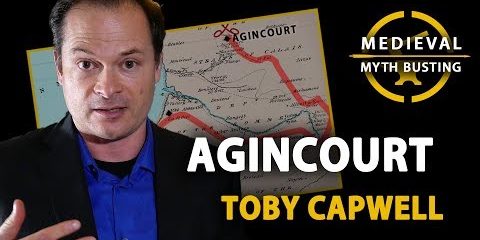 We know a great deal about the Battle of Agincourt; but is what we know true? The battle of Agincourt has been depicted in plays, literature and films for generations. Each re-telling adding another layer to the myths, Laurence Olivier, Kenneth Branagh and most recently, 2019 The King, starring Timothée Chalamet.

The Battle of Agincourt is a legendary event in British history; up there with the defiance of the Blitz for those morale boosting and nation defining moments.

In this film Dr Toby Capwell, Arms and Armour Curator at the Wallace Collection and Tod of www.todsworkshop.com talk through what happened on the day in detail and discuss how the longbow was used. The longbow was without doubt a massively important part of the victory, there is no question about that, but still we know relatively little about how it was deployed; why and how it proved so successful. These gaps in knowledge have allowed the mythology to grow and prosper: separate to hard fact.

In Medieval Myth Busting we try hard to show what we know to be true in an honest and open way and everything else is there to be discussed, by us and by you. Join in the comments, its good for us to all learn from each other.

Medieval Myth Busting all began with a film shooting a 160lbs English longbow at an accurately made breastplate and you can watch that film here https://youtu.be/DBxdTkddHaE