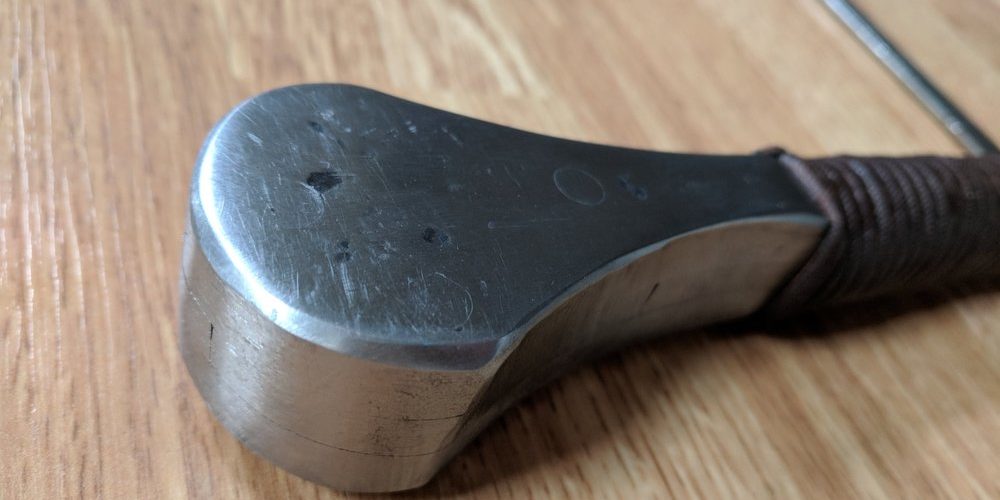 This doesn’t feel like a longsword. I’ve handled held a friend’s Arms and Armor montante before, and a Pavel Moc federschwert (insert joke about how big pavel’s standard feders are here), and it felt rather similar to those. It didn’t feel cheap, it didn’t feel under or over constructed, and it rang like a finely-tuned bell. It arrived with no rust or pits, and with a nice thin layer of oil.

Put your ear muffs on, because the entire design and construction of this screams utilitarian. It’s a tool, and there are no bones about it. Three particularities stand out, however.

The pommel is a flattened pear shape, and is actually constructed from five pieces of steel. It seems that the same piece of steel forms the blade and center of the pommel, the meat of the sandwich. On the sides of the tang, there are two separate pieces of steel, much like lettuce and tomato. Then, two pieces of steel are laid on top and bottom like bread. Finally, all five of these pieces are peened together with steel rivets, much like the steel rivets found in my father’s sandwiches he made for us as children. It’s all solid though.

Two, the grip. The outer grip is thick cord, but with some sort of bonding agent. It provides a grippy … but not too grippy … surface without being too abrasive, and it’s rock solid. It’s tapered rather nicely, which I am a huge fan of. It is a little uneven towards the bottom, however. You can slightly feel it in your hands while it is not in motion.

Continue reading on Measure and Weight

Episode 6: How to Plan a Tudor Tournament: ‘Mills and Miracles’. Oudenburgh, 15th May 1520
15 maja 2020
Select category:
Go to Top
This website uses cookies. By continuing to browse this website, you declare to accept the use of cookies. Accept