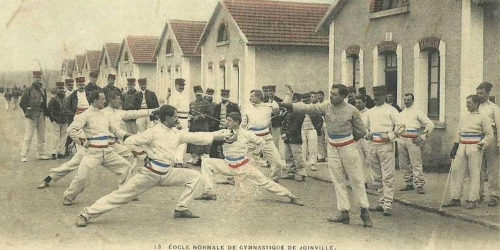 The military fencing academy of Joinville-le-Pont was the most influential institution shaping French fencing in the late 19th- and early 20th century. On the streets, grounds, and in the fencing hall, officer candidates trained in personal combatives such as la boxe française, savage, lutte (wrestling), as well as imports such as English boxing and Jiu Jitsu.

Fencing instruction was provided in foil, epee, and saber.

Here are some of the postcards sent by students depicting fencing demonstrations with the saber!