Academia Leontes: this is how Byzantines fought 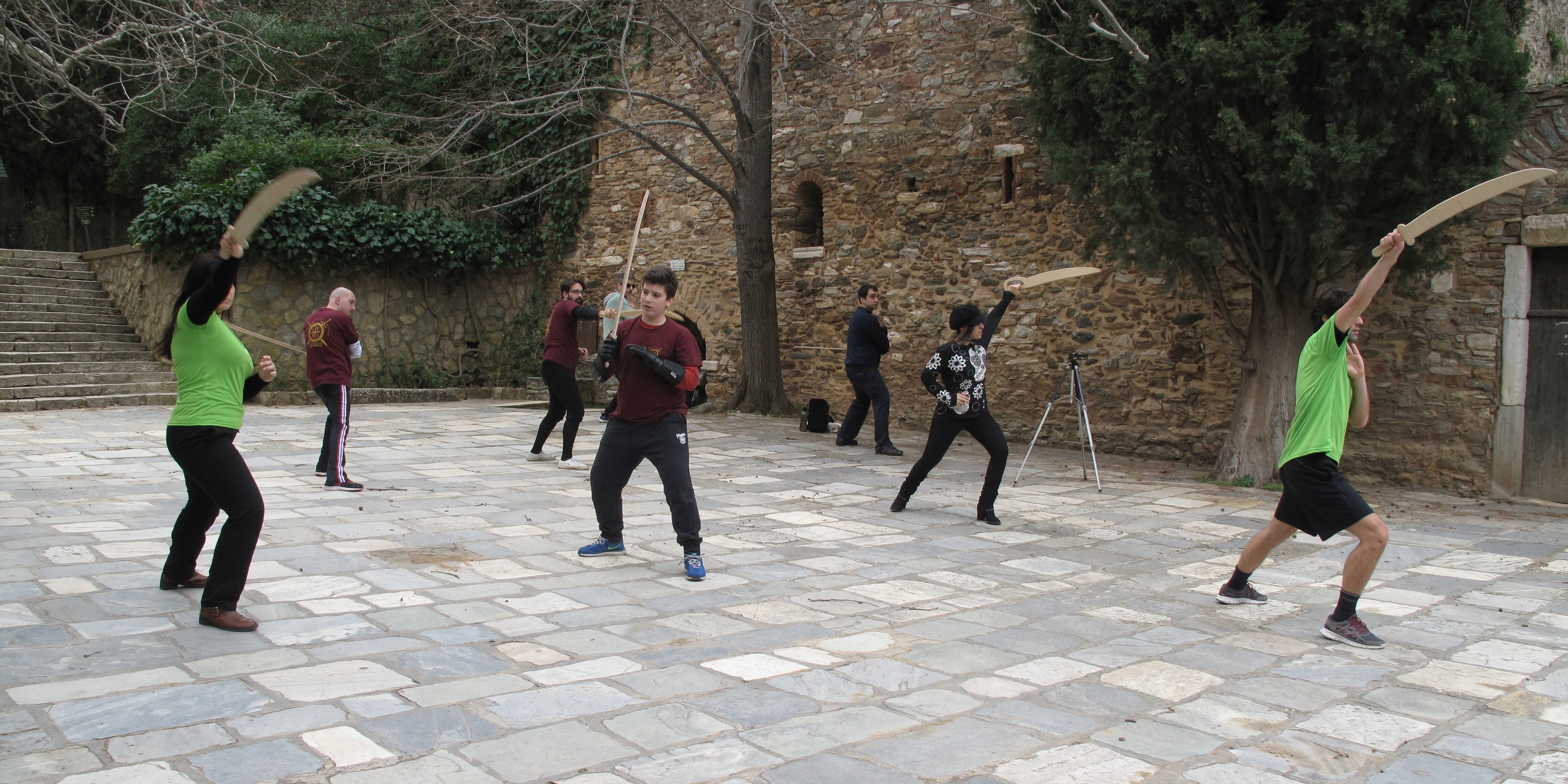 Georgios Georgas is an instructor of historical martial arts in the Academy of historical European Martial Arts “Leontes” – club focused on late Byzantine and post-Byzantine period of history but they also study and practice ancient, medieval, renaissance and modern swordsmanship.

“As far I remember myself, I grew up with the epics stories and poems of Basilios Digenis Acritas (a medieval Greek mythical hero), the legends of the medieval soldiers and war emperors of Byzantine empire, the chivalry of king Arthur and the epics of Iliad. So always I study the medieval and antique millitary history as kid. At the ’90s I decided to start my research on Byzantine Martial Arts. I had to explore how those people back in medieval period fought. So it is a personal quest”, says Georgios Georgas, HEMAist since 1993, Coach of the Hellenic Fencing Federation,  Scholar Researcher and Fechter of Meyer’s Freifechter Guild and Swordsmanship and Pammachon Instructor. 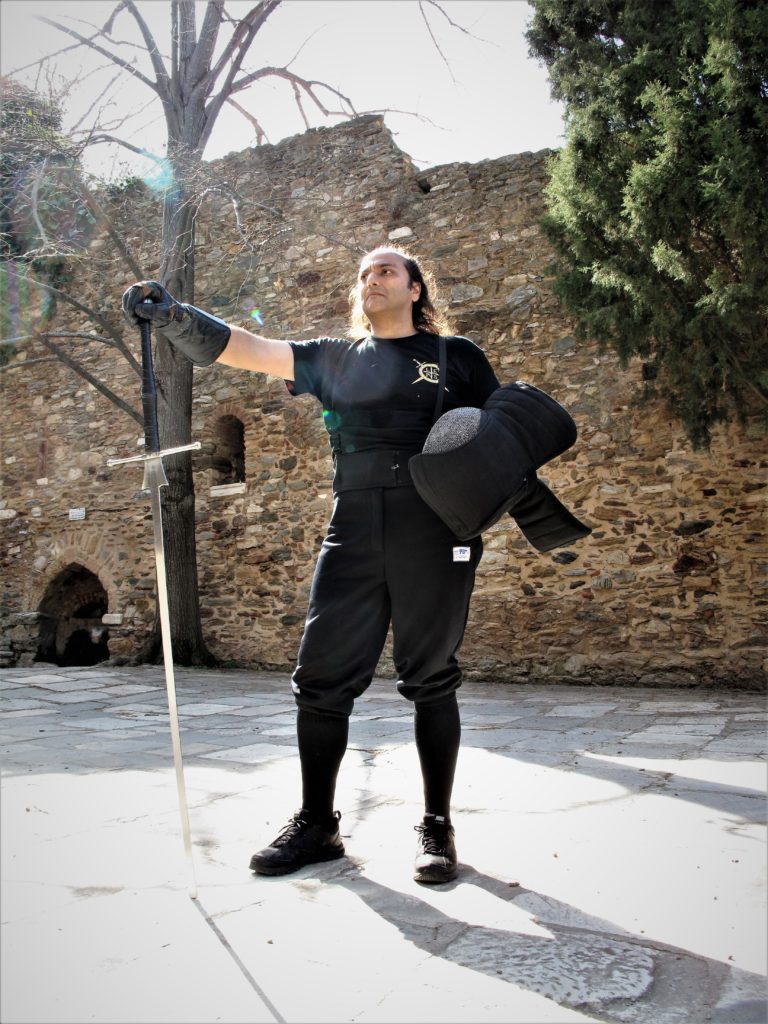 According to Georgos, there was not a Byzantine school of fencing like European Rennesance schools. The martial arts of Byzantines had do to with war in general and did not focus in duels or self-defence.

The soldiers must learn quick, powerful attacks that can be executed in phalanx, fulcum etc. The techniques have limitations and their style gives usage of a shield priority above everything. The shield is not considered only a defense tool but a weapon.

On the other hand, the training of the nobles was different. The noble was not necessary to be in formation, so his martial education had more techniques, methods etc.

It is a method of learn many weapons but to using the same or similar body mechanics, from unarmed to armed combat. 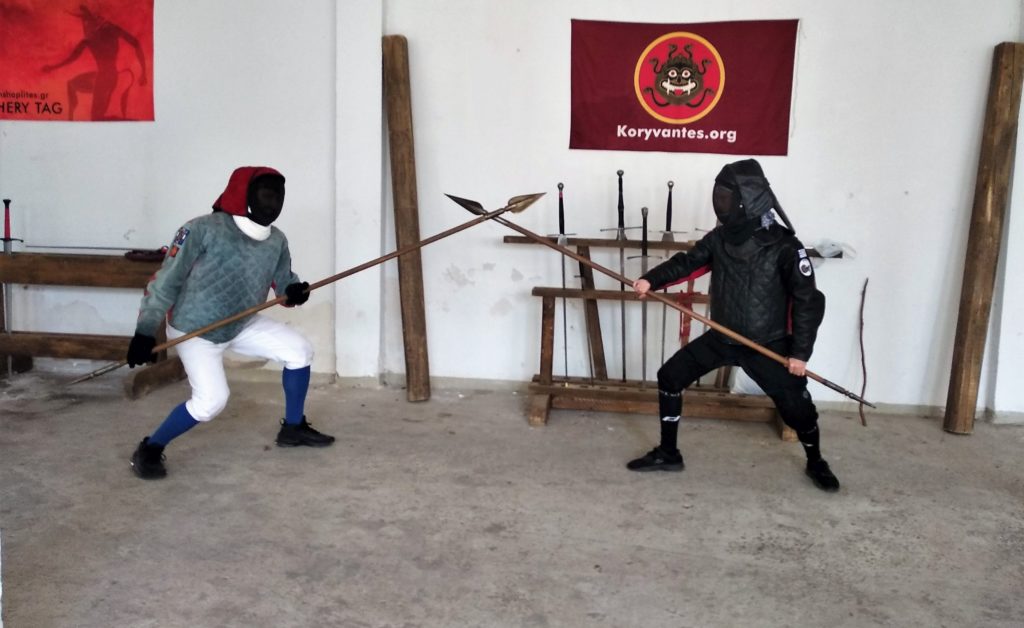 There are no fencing manuals for Byzantine martial arts like these German or Italian schools have but Leontes use other kinds of historical sources.

“We use the principles of fencing from the tradition than never stopped but just altered. For tactics, body mechanics and wrestling we use our traditional martial art pammachon. For footwork, rhythm, basic attacks, parries and tempo we use the Greek war dances pyrichios (dance of fire). Another tool of our work are the military high strategy imperial manuals. From there we can get information about equipment, weapons, tactics, leadership and coaching. And finally there are the miniatures and the art, especially of 10th-12th century: the frescos and the holy icons of military saints”, Georgos explains.

“One very important source is a German Figthbook of a 15th c. German master of arms Martin Siber. In his treatise he wrote that the described techiques were used also by the masters of arms of Greece and his work had been analysed by the German Federfechter Joachim Meyer. So we don’t have a Greek manual but we have German that certifies that the Greeks fought with the same way”, he adds. 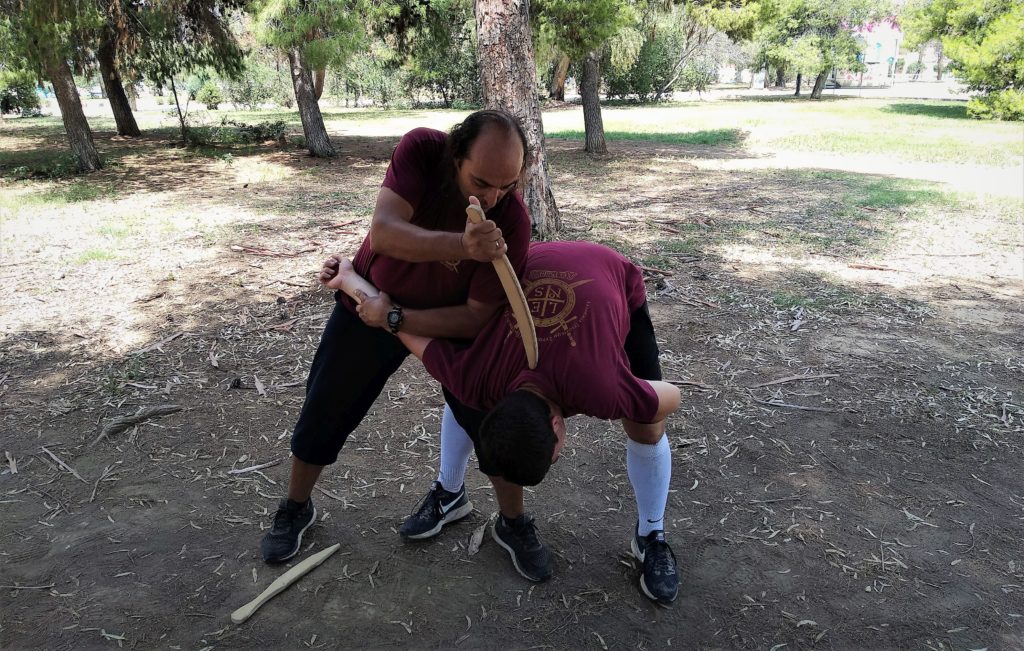 Is it similar to what we can see in modern swordfencing?

Medieval Byzantine martial arts must been somewhat similar to both, German and Italian fencing traditions but there were also differences.

“Martin Simber wrote that Greeks used the same style and last emperor’s personal guards was consisted of 300 German knights. But historical sources say that the emperor’s brother was trained by Italians and there were also plenty of Italians during the period. So in my opinion they used a mixed style of longsword fighting but with differences forced by the environment. For example, our wars were mostly defensive, so if you have to use a longsword in narrow places like forts, castles and Greek cities, you could not use Meyer’s style”, Georgos says.

“Things are a bit different with the sword or saber and buckler. The eastern buckler differs from western European bucklers and is more similar to Persian bucklers, so it’s use doesn’t look like MS.I33 method. For example, we have the reverse shield stance. We also have methods of fighting the sword is in the scabbard like the prokopon guard or the shoulder guard”.

Academia Leontes club has about 60 members. There are also Byzantine martial arts study groups in North Greece, Crete, Chalki, Peloponnese and in Chile. 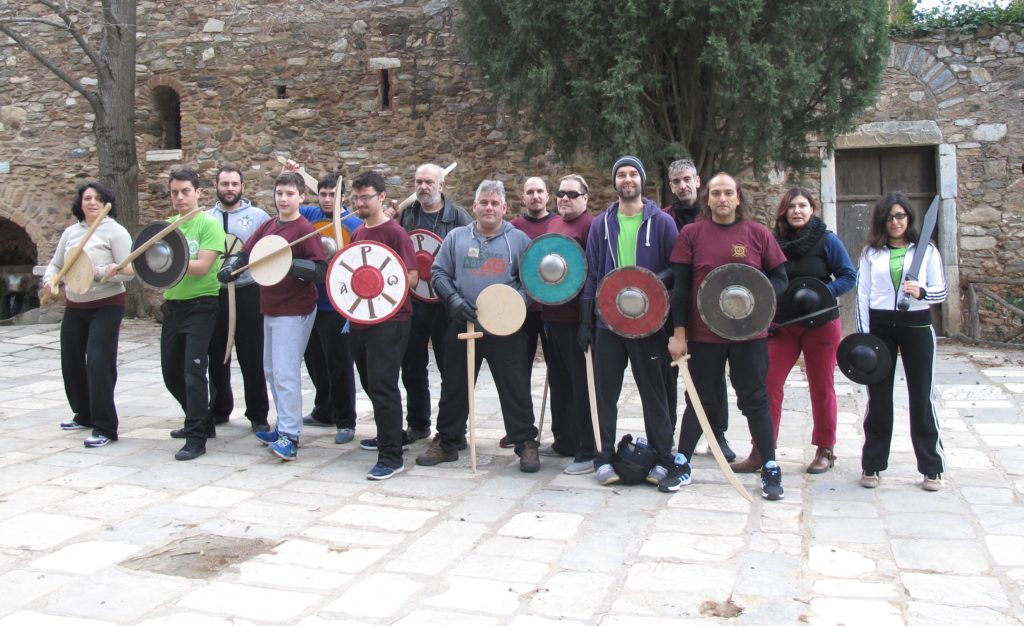 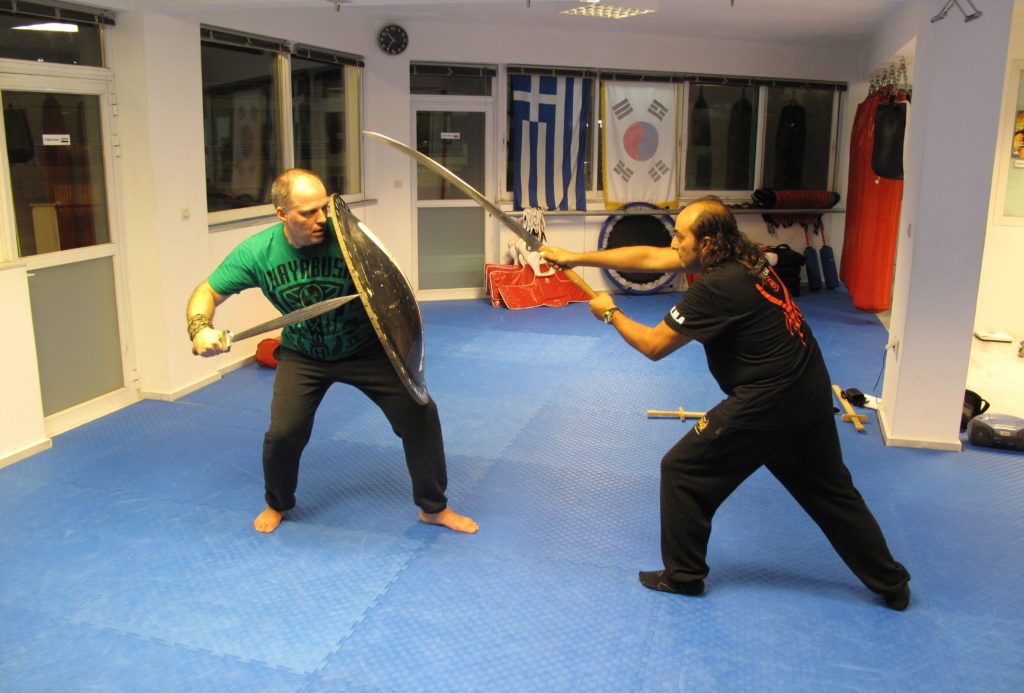 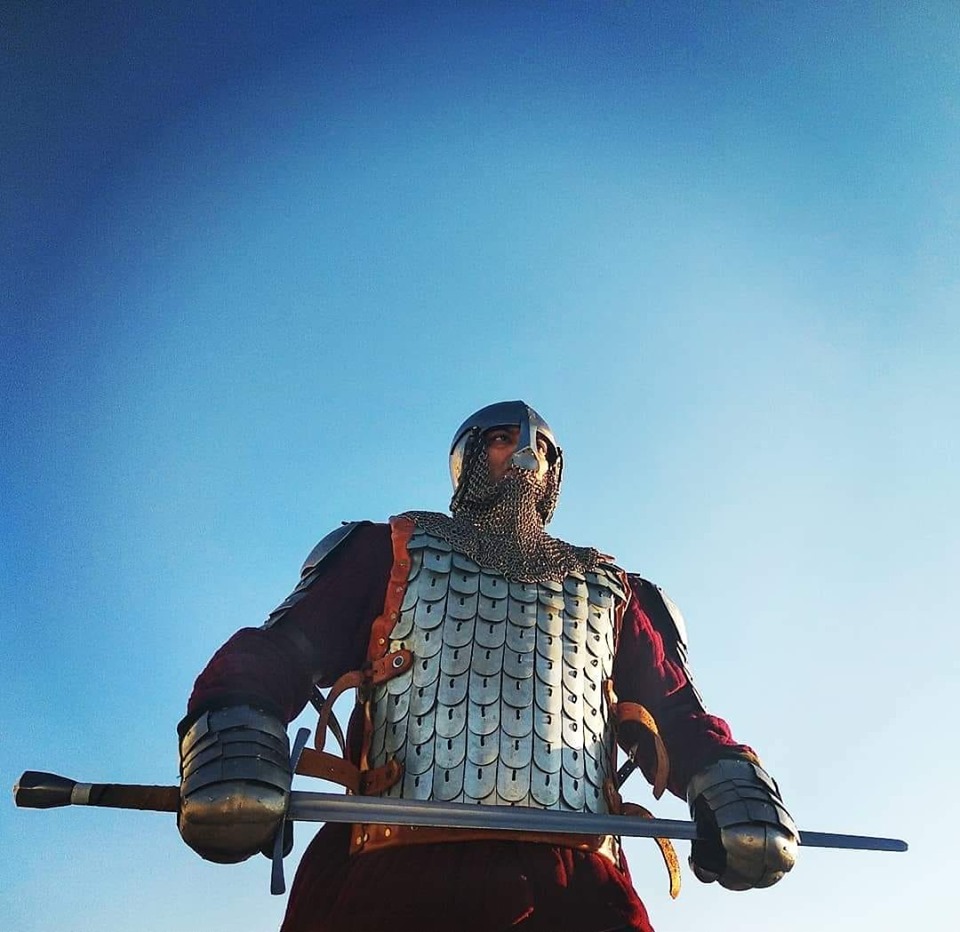